from Gettysburg College with a degree in History and began her museum career as an intern at Norlands Living History Center in Livermore, ME.  While obtaining her Masters in Museum Education from Tufts University, she worked as a tour guide and roleplayer at Orchard House Museum.  Bekki has been a member of the SBM Education Department since 2001 and has been developing and running summer camps and school programs since 2003.  In her free time, she enjoys being outdoors, baking, reading and playing with her two sons, Sam and Max.  Her favorite thing about camp is seeing many of the same campers return each year and stay connected with Strawbery Banke as they grow up.

Maddie’s love of living history began when she was a little girl and visited outdoor museums all over the country with her parents.  As a teenager, she attended Junior Roleplayer camp at Strawbery Banke and volunteered as a roleplayer through high school and college.  After graduating from the University of New Hampshire wi

th a degree in Early American History, Maddie completed internships in archaeology, historical horticulture, and education with the Warner House Association in Portsmouth, New Hampshire and Old Sturbridge  Village.  She worked for three years as a camp director and coordinator of a teen center in Antrim, New Hampshire before joining the team at Strawbery Banke in 2014.  Maddie spends her free time hiking, gardening, sewing, and researching anything historical that catches her interest.  Camp season is her favorite time of year because she gets to spend time with bright kids, encouraging their curiosity and personal interests.

Nicole graduated from the University of New Hampshire with a BA in History and an MA in Teaching.  Whilst studying history at UNH, Nicole joined the museum staff as an interpreter and quickly fell in love with all the museum has to offer.  After graduating from UNH, Nicole began her teaching career at Sanborn Regional Middle School, where she has been teaching 6th grade Social Studies for over ten years.  During her summers, she is thrilled to spend time with the Strawbery Banke campers, and she has been part of the summer camp program since 2011.  In her free time, she is always wearing flip flops!  She loves to read, travel to new places, and she always enjoys a nice cup of tea.

Jenna graduated from the University of Maine at Orono in 2015 with a degree in History and Secondary Education.  Jenna’s love for Portsmouth history began in her senior year of college as her capstone research focused on the history of shipbuilding technology at the Portsmouth Naval Shipyard and its effects on the surrounding communities.  Upon moving to Eliot, Maine, Jenna spent  a summer as an Education Intern at the museum and has continued to work as a counselor every year since.  Jenna is currently a high school History and English teacher in Exeter, New Hampshire.  In her free time, Jenna enjoys coaching small health and fitness groups and hiking with her adopted dog, Trixie. 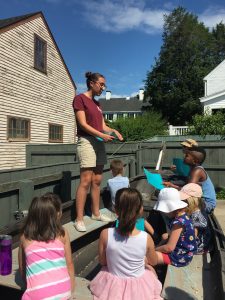 Megan is a senior Literature major at Goucher College in Maryland. She grew up in the seacoast area, and spent her summers every year at Strawbery Banke summer camps! She volunteered as a Junior Roleplayer when she was a teenager, and later worked as a Roleplayer and Interpretor during summers. She is so excited to join the camp staff for the third summer, and share her love of history with a new group of campers! In her free time she enjoys reading anything and everything, and singing.